What’s more important: beating your rival or making the playoffs? …What about both?

San Antonio FC, with much more at stake than their opponents, will host Rio Grande Valley FC on Saturday at Toyota Field – yes, another (regular) season-ending South Texas Derby.

It’ll be the 10th meeting between the two clubs, all in the regular season, and the fifth at Toyota Field. In the previous four home derbies though, SAFC has only one win, which came a year ago on Sunday.

The rivals have faced off twice already this season, both at RGVFC’s H-E-B Park. They first played to a scoreless draw in May in which SAFC goalkeeper Diego Restrepo made five saves and preserved a point for an otherwise drab SAFC, also earning USL Team of the Week honors for his efforts. The other match, in August, saw SAFC concede early but rally in the second half behind Lance Laing’s first of five matches with a goal and assist, for which he also earned Team of the Week honors.

Now they meet at Toyota Field with SAFC basically needing a win coupled with Saint Louis FC and/or Swope Park Rangers dropping points in order to leapfrog either of them for the final playoff places.

While SAFC has bounced back as of late to put themselves in the position to potentially still make the playoffs, the already-eliminated RGVFC has also been in good form as of late, winning three of their last four matches – albeit against lesser opposition, but it builds momentum. Similar to SAFC, they can beat even the best teams on their day but can’t do it consistently.

While there are a lot of ways in which the two teams are similar with just one match left to go in their seasons, they do differ in a few ways. There have been fewer goals on both sides of RGVFC’s matches, but it stands out most on the offensive side as they’ve scored just 34, barely over one per match, which ranks 29th in the USL, and their conversion rate of 11 percent is in a four-way tie for the worst in the league. Comparatively, SAFC is near the middle of the pack for those stats. 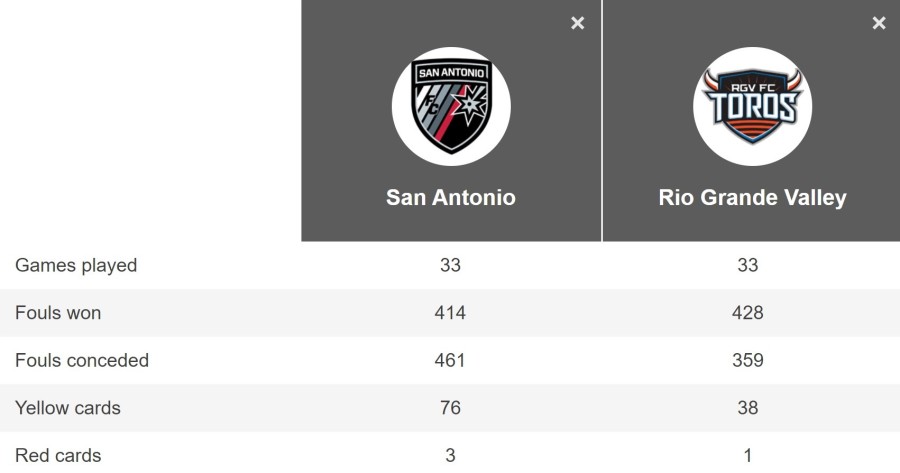 When it comes to discipline though, while SAFC is near the top of the charts, RGVFC ranks near the bottom. SAFC’s 461 fouls and 76 yellow cards both rank second-highest in the league, while RGVFC’s 359 fouls and 38 yellow cards (that’s exactly half of SAFC’s tally) are third- and second-lowest, respectively.

Both teams this season have been hit-and-miss but SAFC needs a result much more than their rivals. SAFC doing the job they need to may still not be enough to make the playoffs, but they could at least end the season positively with a win over their rivals.

It’s worth noting the two Texas rivals will have company next season as Austin Bold FC and El Paso Locomotive FC will begin USL play in 2019, suddenly doubling the number of USL teams in the state.