NextRecap: Los Dos and SAFC cancel each other out in Cali (again)
SAFCUSL

Defense was the foundation of SAFC’s gameplan in 2017, sometimes almost to a fault. With a similar emphasis on that side of the ball in 2018, things have been a bit rougher so far.

Last season it took until April 25th for SAFC to concede 3 goals. This year it took 92’ #SAvSTL

While the intent is the same for SAFC, the personnel is quite different. Of the first-choice back four from 2017, only center back Stephen McCarthy and left back Greg Cochrane returned to SAFC. The former hasn’t made a competitive appearance yet in 2018, and the latter was only able to play the first 83 minutes of SAFC’s United Soccer League campaign before coming off and subsequently missing the next two matches. Goalkeeper Diego Restrepo also returned, but it doesn’t do much good if the defense in front of him is quite different.

Enter a host of new defenders for 2018, including the likes of center backs Ryan Felix and Chris Christian as well as right back Darnell King, all three of whom have played every minute of SAFC’s season so far. Each has experience and talent, but they haven’t had the chance to perfect their defensive chemistry just yet, unlike the SAFC of 2017. Christian even said he and center back partner Felix joined SAFC later in preseason than most.

SAFC Head Coach Darren Powell doesn’t hide the fact he expects more than just his defenders to, well, defend. That said, defenders are the players you depend on for that the most, they’re the closest ones to goal, they’re trained for it – and Powell knows all this.

“When you don’t have the guys here on day one, they miss out on some of the information, so we have to play a bit of catchup with those players…(but) they’re all pros and they all understand how to defend, first and foremost, which is the primary objective of that position,” Powell said. “Now it’s just working on those partnerships and understanding of each other.”

Despite SAFC’s rocky start defensively, there’s still positivity in the camp. SAFC’s focus on defense as well as the impressive showing they had in 2017 provided an “exciting challenge” for newcomer Chris Christian. Mike Seth, who has filled in for Cochrane at left back in the last two matches, feels alright stepping in alongside other newcomers – while Seth joined SAFC mid-2017, he is primarily a forward, though he has occasionally played on the wings and in defense.

“It’s pretty easy to step in when you have a good group of guys surrounding you, so I’m just trying to take it day by day and just keep learning,” Seth said.

Even beyond Seth reacclimating to a more defensive position, everybody is learning both individually and as a unit…so how has that process gone so far? How has SAFC’s defense fared in their first three matches, on the stat sheet as well as the pitch? 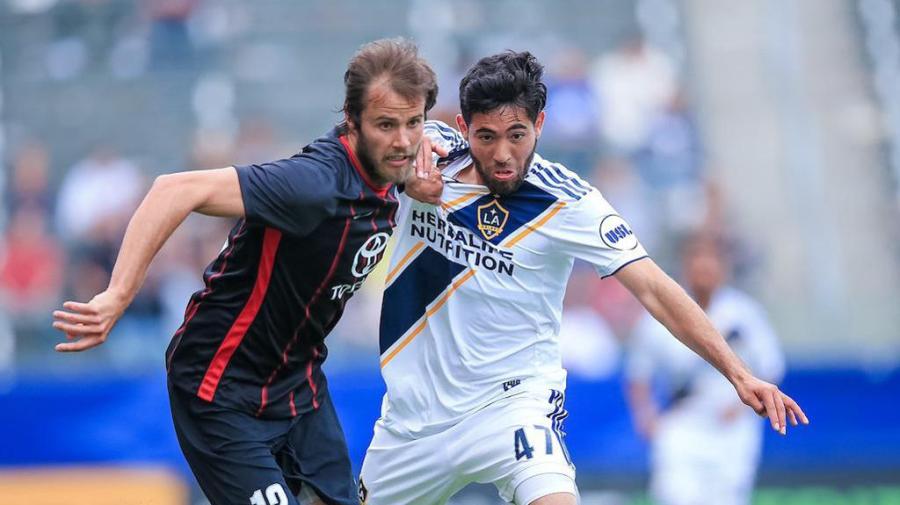 You didn’t need to watch SAFC’s 2018 season opener away to Sacramento Republic FC to know the defense struggled; the 2-1 scoreline spoke truthfully. Sacramento came out all-guns-blazing at home for the season opener, and SAFC’s defense struggled considerably to cope with the pressure – the Sacramento commentators picked up on it fairly early. In various ways, it was clear the connections between defenders as well as their goalkeeper still needed some strengthening.

Throughout the night, SAFC’s defense was warped out of shape on multiple occasions, and not just when players would purposefully move to defend one-on-one. Some members of the line would sit too far forward, others were too far back, there would sometimes be widening holes in the line and perhaps the team-wide commitment to defending created some false faith in those auxiliary defenders at times – maybe more because of Sacramento’s pressure than SAFC’s defending, but either way they paid the price.

That’s not to say both goals were because of these mistakes – you could argue the first was down to a precise assist and the second happened because a ball fell in the wrong place in front of goal – but it gave Sacramento the power to dictate the tempo, especially when they got forward with a full head of steam.

The struggles with shape reared their ugly head again just two minutes into SAFC’s second match and home opener against Saint Louis FC. A domino effect in defense saw the center of the box understaffed and Saint Louis FC forward Kyle Greig was uncontested when he redirected a cross into the far corner of the net with his head. SAFC got pulled too far to one side and left quite a void at the far post.

“(Defending) has so much to do with communication and organization going into those moments, and with players that aren’t really accustomed to spending lots of time together (and) really don’t know each other’s tendencies, you’re going to get some of those things – you’d like those things to come out on the training field and not here in the home opener. (The defenders) have got some great experience in the league, but they’re going to have to utilize that and become a lot more effective and a lot more sturdy as a collective group.”

Those were the words of commentator Lance Key (himself a defender who made 34 appearances for the Colorado Rapids in 2000 and 2001) just a few minutes after SAFC conceded that goal. Key seemed to strike the delicate balance between criticism and realism, a balanced take which I advocate as well, just maybe not as eloquently.

Since then, when SAFC had conceded a goal about every half-hour up to that point, they’ve gone 178 minutes without letting one in the back of the net. Despite the early gaffe at home, they showed less disorganization and their passing around the back was more confident from that point on.

They continued to show greater stability in their scoreless draw away to Los Angeles Galaxy II. Incidentally, that match also marked their first clean sheet of the season, a feat which Powell as well as midfielder and captain Ryan Roushandel said they set as a goal for that match. They expressed some disappointment at not getting a goal themselves, but especially with defense as the foundation of their gameplan, getting their first clean sheet of the season will give them confidence.

There have been occasional hiccups, to be sure, but SAFC’s defense handled them better than they did in Sacramento. Powell said he sees the defense getting better as a group in practice, and the same could be said for actual matches.

There are at least a few potential reasons for SAFC’s improvement in defense. For one, the cumulative passing accuracy of the four defenders has steadily increased over the first three matches: 82% against Sacramento, 83.9% against Saint Louis and 86.3% against Los Dos. It helps the entire team when passes amongst and from the backline are finding the right feet.

Even throwing stats aside, the defenders don’t dwell in possession and allow the defense to seal off escape routes as often, and they pass to each other with more fluidity and confidence.

Speaking of passing out of the back, Restrepo made a considerably greater proportion of long passes against Saint Louis (68.2% compared to 39% against Sacramento and 40% against Los Dos), and SAFC also made their most clearances in a match so far this season that same night with 18. Making those long passes or clearances is usually a sign of either ambition or caution; either way, SAFC got the ball away from their own goal and upfield for the offense to make things happen, and it worked to the tune of two goals.

In SAFC’s first match against Sacramento, it seemed odd that Ryan Roushandel was moved into more of an attacking role in midfield. While he had moved from center back to defensive midfielder toward the end of SAFC’s 2017 season, his skills didn’t exactly work out even farther up the pitch.

Negatives:
– The spine of the formation for most of the match looked lost. Appeared to be what allowed first goal.

The personnel were right but the arrangement slightly off; SAFC moved Mikey Lopez into an attacking role and Roushandel back to shield the blackline, and it has paid dividends on both sides of the ball. In Roushandel, the backline has a large and strong defensive midfielder to help relieve pressure and keep possession then pick precise passes going forward. In addition, there have been times since Roushandel moved back where he becomes an auxiliary center back when the SAFC defense is stretched, which is bound to happen occasionally.

Of course, there are two teams in soccer, and it’s only fair to credit some of SAFC’s perceived defensive improvement to a decrease in opponents’ pressure – Saint Louis and Los Dos haven’t heckled SAFC nearly as much as Sacramento. If that’s only an effect though, it could be the cause of SAFC building more confidence and cohesion at the back as they’re allowed to string passes together. 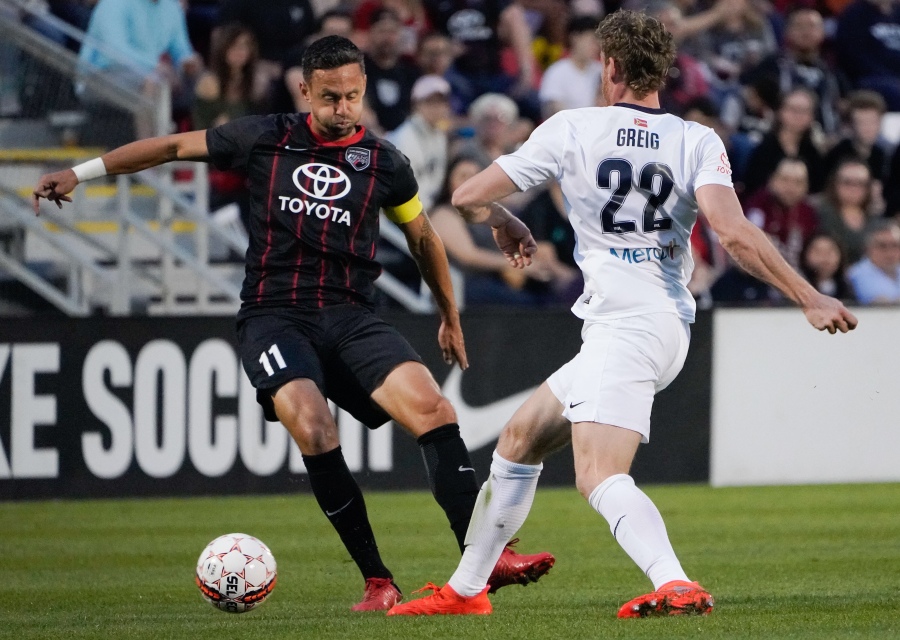 It’s still early in the season, and SAFC has recovered from a rough start. By no means is their defense perfect or arguably even as good as the defense from 2017, but it has the potential to get better and has already started doing so.

Powell and Key spoke similar truths and it’s hard to disagree with what they said: these players are talented and experienced, it’s just a matter of them syncing up in due time.

They’ll get an interesting test this weekend as Swope Park Rangers come to Toyota Field. Matches between the two sides are usually close, with the exception of a 5-2 drubbing Swope handed SAFC at Swope Soccer Village last season. The MLS2 side scored four goals in each of their first two matches this season before Las Vegas Lights FC held them to just one, and their offense will be kept fresh Wednesday night with the inclusion of two proper first-team attackers as they travel to face Colorado Springs Switchbacks FC.

It’s not going to come together overnight, but the defenders SAFC has are too good for it to not happen eventually. If the defense can find their cohesion and hit their stride later in the season as SAFC heads for the playoffs, everybody invested in SAFC will be just fine with that.

2-1, FT
I think this may be indicative of SAFC this season: dodgy start but they bounce back and see their efforts rewarded. #SAvSTL #USL